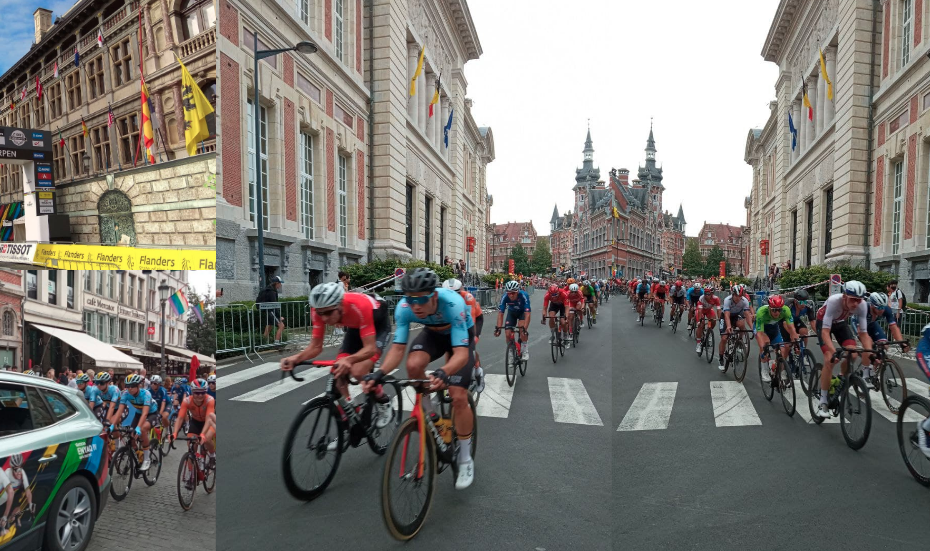 When you read constrained multi-objective optimization problem or game theory, you will most probably not think of Julian Alaphilippe or Elisa Balsamo next… or will you?*

Last weekend of September we travelled to Flanders to assist, first line, to one of the most exciting cycling races of the year, the 2021 UCI Road World Championship. We met with some colleagues at the cycling federation. And we witnessed the fascinating battle, throughout both the women and men elite road races, from the starting line in Antwerp, to the scenic finish loop in Leuven. Beyond boosting our passion for cycling even more, we had time to reflect on the present and future of data science in such an epic context.

Cycling is a fascinating sport. And we are not (only) writing this as avid race spectators, or amateur cyclists ourselves, but purely from a data science perspective. Let’s look at a single professional rider: we are talking about tens of thousands of kilometers (around ~1000 hours) of exercise data recorded every year. In many varied conditions, places, tracks, from programmed training routines, to the most epic races to be seen.

And each of these records contain not only per-second information on the relative effort of the rider, such as the heart rate; or the outcome of that effort, like the speed and other GPS data. Since the advent of power meters, we are talking about the work produced by them: the power they are actually producing.

This is complemented with multiple other sources of information: some related to the rider itself, e.g. health records, stress tests, wellbeing data; some to the competition data, e.g. track characteristics, race strategies; and some to other aspects of cycling, such as aerodynamics or bike technique. How can all this data be used to maximize the chances of victory of a rider?

At PickleTech we think data science and machine learning, properly approached with the performance team including sports scientists, have a lot to say on this. Our work on AI augmented individualized training plans can enhance the impact of a preparation team, maximizing the rider’s physical performance the day of the race.

But you know what is best? That is just the beginning, because cycling is indeed a team sport! The focus must go beyond the individual: maximal chances of victory are only accomplished within a team perspective.

Let’s think for a second we have distilled all the data above, and we have developed an accurate profile of how a rider should perform at any given race: its expected performance metrics, his power curve, his riding profile, even how he is going to face specific race conditions on competition day. Promising!

Oh well, minor detail, we still have around a hundred competitors to face in the race, many unknown variables! This is what in game theory is called an incomplete information game, in contrast to others like chess. Luckily, here in cycling, we at least have a few other riders in the same team that collaborate together. It is not that we cannot learn and know anything about the competitors, but the ones in our team, these we can control. There are 5-10 team riders per race, selected over a pool of around 25-30 riders per season. These are quite some different rider profiles to take into account at the same time for each competition!

And they are all needed for any team’s victory. Every race becomes a positioning game, in multiple senses, extended over 3-7 hours. Knowing when and how each of the riders in your team has to deliver the best of their power performance is key. Who, when, how to breakaway? How much to push when someone else is attacking? How do we gauge the efforts in key moments in order to get to the finish line with enough in your team’s legs to get that victory? Aerodynamics plays such a huge role in cycling, see for instance [1] and [2], that strategy across a race (and a season) is a key element for any elite team.

These are many variables and constraints to consider. Furthermore, the objective to maximize is not even unique, as teams have multiple ones to accomplish. Not every competition is a single day race, there are also Grand Tours. In there, the stage victory is important, but we are talking about three continued weeks of competition, with several partial victories, every day, and major ones at the end. And every effort has a consequence for tomorrow!

Even going beyond Grand Tours, this is endurance racing, teams do not only need to plan for one competition, be that a Monument, another single day race, or a Grand Tour; we are talking about planning the whole season, competition after competition. And many times even with parallel teams competing in different races, different track profiles, and different competitors to beat in those. And that is still not the end of it. Because when the race season is over, how do we measure the value of a rider, when there are no victories for him in that year? How do we value all the work and value he or she brought to the team performance, and the victories of his or her team colleagues?

While these problems in cycling are formulated in terms of riders, victories, UCI points, FTPs, stages, Grand Tours or sponsorships; the data science approach has a lot to do with predictive analytics, complex optimization problems and game theory. These are challenging questions to solve, but with such a data playground, finding the way to process, analyze, and extract actionable recommendations from all the data above, provides a new competitive edge.

And as challenging as it may sound, it all looked so simple watching Balsamo sprinting her way to glory, and Alaphilippe shaking his head to victory, on the streets of Leuven. They became the winners of one of the most thrilling races of the year, the UCI world championship. Raced with the national teams, without in-ear communication, and with such a long and tough track (267km this year), the world championship usually becomes so apparently unpredictable and exciting, that it is actually a dreamt playground for a bunch of data scientists!

* If you also do, really, please, do message us, we will try to find the help you need…

We use cookies on our website to give you the most relevant experience by remembering your preferences and repeat visits. By clicking “Accept All”, you consent to the use of ALL the cookies. However, you may visit "Cookie Settings" to provide a controlled consent.
Cookie SettingsAccept All
Manage consent

This website uses cookies to improve your experience while you navigate through the website. Out of these, the cookies that are categorized as necessary are stored on your browser as they are essential for the working of basic functionalities of the website. We also use third-party cookies that help us analyze and understand how you use this website. These cookies will be stored in your browser only with your consent. You also have the option to opt-out of these cookies. But opting out of some of these cookies may affect your browsing experience.
Necessary Always Enabled
Necessary cookies are absolutely essential for the website to function properly. These cookies ensure basic functionalities and security features of the website, anonymously.
Functional
Functional cookies help to perform certain functionalities like sharing the content of the website on social media platforms, collect feedbacks, and other third-party features.
Performance
Performance cookies are used to understand and analyze the key performance indexes of the website which helps in delivering a better user experience for the visitors.
Analytics
Analytical cookies are used to understand how visitors interact with the website. These cookies help provide information on metrics the number of visitors, bounce rate, traffic source, etc.
Advertisement
Advertisement cookies are used to provide visitors with relevant ads and marketing campaigns. These cookies track visitors across websites and collect information to provide customized ads.
Others
Other uncategorized cookies are those that are being analyzed and have not been classified into a category as yet.
SAVE & ACCEPT
EN
ES CA EN